For school plays and other fun dress-up occasions, colonial clothing for kids may be the perfect look for your child. Colonial style clothing for kids is similar to the adult clothing that was worn in the same period, but there are some important differences. Learn more about the style of this clothing as well as some options to help you make your own or purchase online for the child in your home.

Unlike our current access to colors, patterns, and fabrics, colonial clothing was made of basic fabrics in basic colors. Cottons were common, as was wool, especially in colder climates; linen was less common than cotton, but frequently used. For everyday clothing, and certainly for clothing of families with little money, fabrics were in basic colors that the most dyes came in, such as muted grays and blues. More expensive clothing could be found in more luxurious colors, such as bright reds, pinks, and shinier blues when the fabrics were more expensive, such as silk.

The way clothes were made and held together was also largely dependent on the financial means of the person wearing them. Nondescript sewed seams and basic buttons were at the cheaper end of the spectrum; colonial people with good financial means often wore clothing with pearl buttons and lace sewn on at the seams. In the colonial period, girls' clothing did not necessarily have more ornaments than boys' clothing; money was the deciding factor during this period. 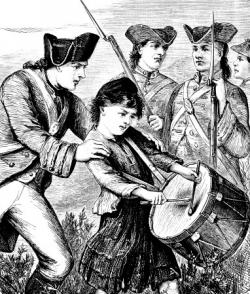 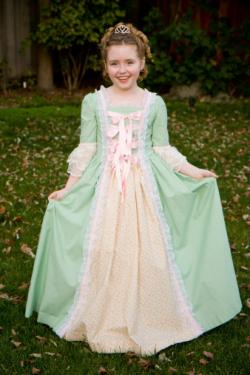 Girls stayed in the baby/toddler dresses that boys wore until a later age. Of course, girls would stay in dresses all their lives, but the baby gowns became slightly different as girls became older. A distinctive feature of young girls' dresses in the colonial period was that there were long strips of fabric attached to the shoulders of the dress. This was done for most toddlers, male and female, so that adults could help the children fall less and not wander away; however, as boys grew out of this clothing, girls stayed in it.

Long after the moment when boys had graduated to pants and jackets, girls' dresses still featured strips of cloth on the shoulders. In addition, girls wore a boned bodice, called a stay, that helped them to achieve good posture. All in all, girls' colonial clothing was relatively restrictive.

However, as the colonial period progressed, adults changed their stance a bit on children's clothing. Girls' dresses stopped being miniature versions of women's dresses; skirts were shortened, and bodices became more relaxed. Girls' clothing had more detailing in it than boys' clothing, but the clothing was far from being fancy. Compared to Victorian kids' clothes, the clothing from the colonial period is quite subdued.

If you are looking for fabrics true to the time period, try C&D Jarnigan Company or Brick House Fabrics. These companies both sell fabrics by the yard that are true and authentic to colonial times. You don't want to show up to your colonial event in rayon! 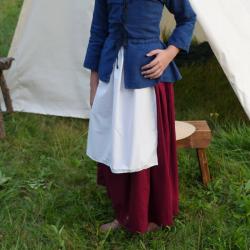 If you do not have the time to make your own, there are places to purchase pre-made or custom-made colonial reproduction clothing for children.

Interested in learning more? A great book, especially for kids doing school projects is Clothes in Colonial America. In this book you will find not only lots of visual examples of colonial kids' clothing, but also explanations about why certain trends in clothing existed during colonial times. Whether the colonial clothing is for fun around the house or a school project, knowing why each item is authentic adds to the experience of wearing the outfit.