In the early years of the 60s, clothing styles for girls were not very different from what had previously been seen and change came about gradually. The post-war baby boom meant the demand for children's clothing in the 1960s was higher than ever before, and there are some aspects of girls' fashion that stood out during this period.

With fewer parents sewing their children's clothes, it was a boom time for the industry.

While synthetic fabrics had been in use since the war, they were now the norm for 1960s children's clothes, rather than the exception. So while 1960s clothing for girls still anticipated "ladylike" play, clothes made of polyester and blended knits allowed for a bit more running around with less fear of permanent staining. Parents were delighted with the modern clothes - they didn't fade as readily in the wash and didn't require the starching and pressing that kept mothers and maids so busy. They were also more comfortable for the children, and, as Fashion-Era points out, those mass produced synthetic items were easier to care for.

The look, however, remained similar to what was already familiar. Girls' dresses were short with wide skirts and fitted bodices. A dress for a special occasion often featured puff sleeves and ruffles at the neck and hem. Crinolines were still worn under the skirt - girls' skirts slimmed only gradually and always remained at least A-line. The People History shares a variety of looks for girls in the 1960s. Compared to what children wore in the 1950s, not that much changed.

While a girl was still expected to wear a dress to school, her play clothes were now more likely to be shorts or trousers. Jeans were not yet seen on little girls, but they wore long fitted trousers, capris or pedal pushers. 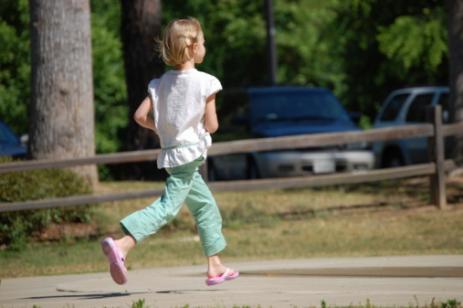 Changes in Colors and Patterns

While a dress might have a similar cut as one from the 1940s and 1950s, much of what distinguished 1960s clothing for girls was the colors and patterns that the synthetic fabrics could offer. The busy and bright patterns of the 1960s were not available until the later years of the decade, but strong pinks, yellows and bright greens were very common in girls' clothing. Earth tones, dark greens, and plaid were popular, according to The People History. You can see more examples of girls' (and women's) 60s styles at RetroWaste.com. 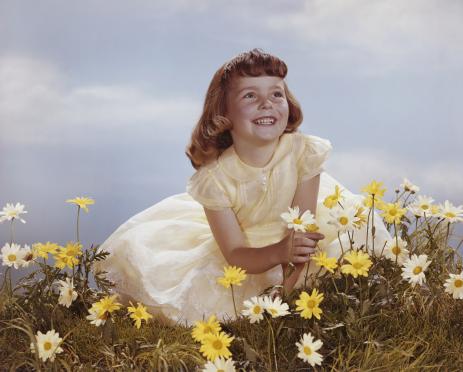 As the decade progressed, stripes became very fashionable. For women and children alike, there were boldly striped dresses or trousers, worn with a top in one of the colors of the stripes. While little girls still wore socks, even in winter, tights were available from around 1965, when the mini skirt was introduced. Soon after, it was common to see little girls wearing a brightly patterned dress with a solid but bright colored tights underneath. 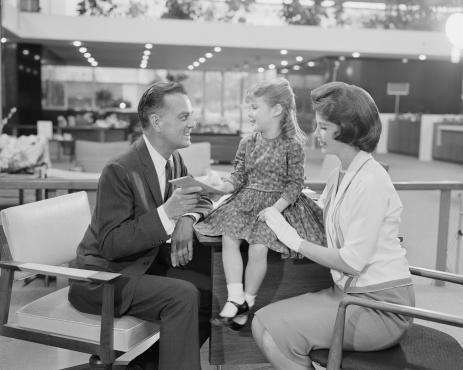 The hippie look of the late 1960s is so entrenched in popular culture, it is assumed that 1960s girls clothing naturally encompassed this style. This was not the case - hippie clothing was very much for teenagers and young adults and they prided themselves on pulling together their wardrobes from found items.

Manufactured clothing for children still adhered to more conservative cuts and styles. Around the very end of the decade girls could be seen wearing bell-bottomed jeans, which were worn by hippies, and there might be some beads, flowers or patches on their clothes. But unless their parents were hippies themselves, hippie fashions were not seen on younger children.

If you want to buy vintage or reproduction 1960s clothing for girls, check out the following:

With Etsy, you never know what you'll find because inventory is always changing, but you can find vintage and vintage-style dresses, patterns from the 1960s, play clothes (shorts and tops), suspender skirts, and more.

Bella Bliss is a specialty clothing store that has a selection of vintage-inspired girls' dresses, like:

Little Rabbit Wears has a whole hippie collection. Though little girls in the 60s didn't usually wear the all-out hippie style, you may want to bring a bit of that vibe into the present day without resorting to a costume. These options may be perfect for your needs. Some of the 60s-inspired items (not necessarily limited to the hippie look) include:

You can easily find 1960s children's clothes in good vintage shops and online. Since the clothes were well-made, they lasted and the resurgence in their popularity has made many women of that generation search their storage bins and find their old clothes for the young girls in their lives. Many of the clothes were bright, bold and buoyant - exactly representative of the generation that grew up in the 1960s and what we still want for modern girls.